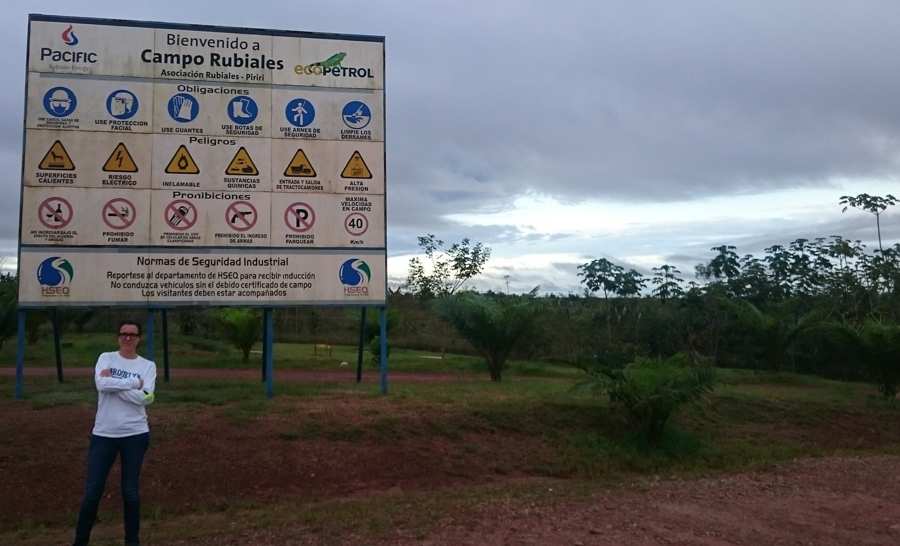 Equitable Origin Chief Executive Officer Soledad Mills at the entrance to the EO-certified Rubiales oil field in Colombia. Mills and Director of Latin America Operations Sebastian Pérez were both on site to oversee the verification audit of Rubiales and the adjacent Quifa field.

In September of last year, EO announced a major milestone: the first-ever certification of an energy development site under the EO100 Standard. The EO certification of the site, comprised of two oil production operations (the Quifa and Rubiales fields) in rural Colombia operated by Pacific Exploration and Production (E&P) (formerly Pacific Rubiales Energy), marked the beginning of a new chapter for EO and for energy development by demonstrating that independent, stakeholder-based standards could successfully measure and incentivize best social and environmental practices. Shortly after the certification was granted, we published a certified site profile that gave an overview of the characteristics of the site and a summary of the findings by Assessment Body that performed the Certification Audit, Deloitte Colombia.

As part of the EO certification process, certified sites are subject to annual Verification Audits for three years after the certification. A few weeks ago, Deloitte Colombia returned to the Quifa and Rubiales fields to perform the Verification Audit. Equitable Origin CEO Soledad Mills and Director of Latin America Operations Sebastian Pérez joined them there to oversee and participate in the audit. 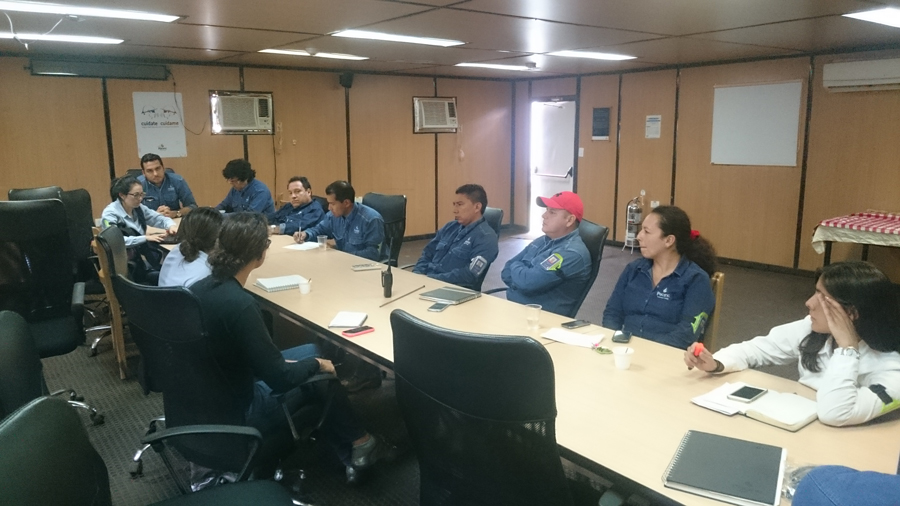 Verification audits differ from certification audits in that they focus on specific issues identified using a risk-based approach taking into account the level of performance in the initial audit, the type and complexity of the operations, conditions within the sector (for example, if issues have arisen at other, non-certified sites in the same area), regional context (for examples, issues that are particular to the country, for example, security or corruption), any complaints or grievances raised by stakeholders and follow-up on action plan items.

In the case of the Quifa and Rubiales site, EO did receive a complaint from the international labor organization AFL-CIO in December 2014, which alleged improper labor practices by the site operator that violated EO100 provisions (the review of this complaint is ongoing, and data collected during the verification audit and site visit will inform the conclusion of the review process--check back for updates on the process in the coming weeks). As a result, the auditors and EO staff focused their efforts on evaluating labor conditions and engaging with workers and and members of the community to identify any evidence of poor practices that do not comply with the EO100 Standard. During the Verification Audit, Deloitte auditors doubled the number of employees and contractors interviewed during the Certification Audit. 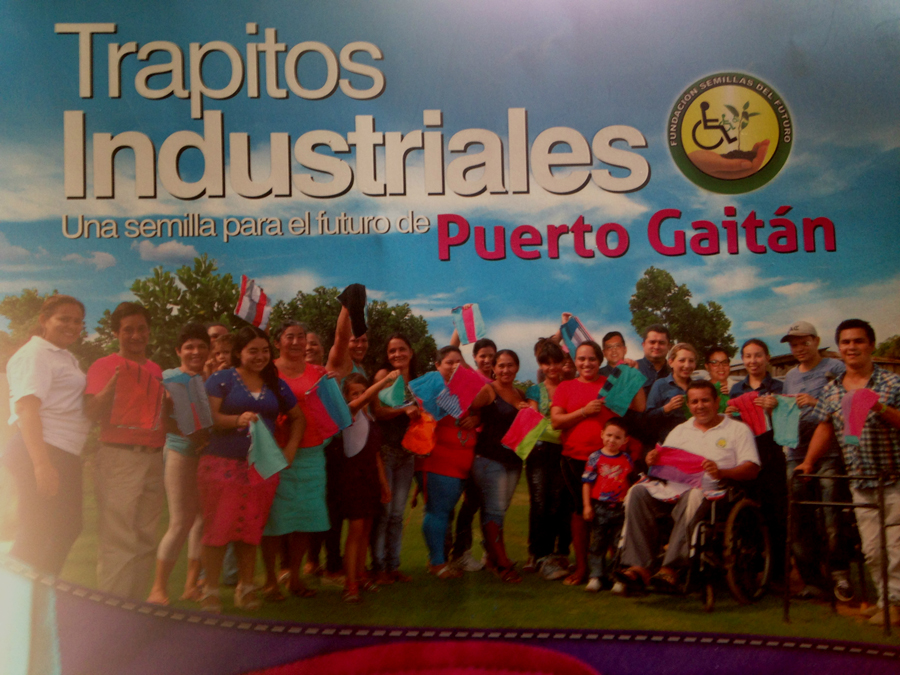 Sign for the Trapitos community development program, which was created through a grant from certified site operator Pacific E&P.

In addition to observing interviews of site staff, Mills and Perez visited the community of Puerto Gaitán, the municipality closest to the certified site. Although it is quite far from the Quifa and Rubiales fields (an hour by plane plus three and a half hours by car), Puerto Gaitán is home to may Pacific employees who work at the fields and is the center of several social investment programs created and supported by Pacific. One such program is the Trapitos (loosely translated as "little rags") initiative, created and operated by the small local foundation Semillas del Futuro ("Seeds of the Future"). Through discussions with the foundation's founder, Mills and Pérez learned that a grant from Pacific had funded the creation of the Trapitos program. Trapitos people with disabilities from Puerto Gaitán and surrounding communities to sew together scrap cloth from textile factories into small, thick rags that oil field workers use to soak up oil and other materials on the job. Since its initiation in January 2014, the Trapitos program has grown rapidly, from five to 45 employees, fueled by strong demand from Pacific E&P and other oil and gas operators in the area. “The program has improved our livelihood and given opportunities to people with disabilities," explained the founder of Semillas del Futuro. "Thanks to PRE, people can recognize our utility as workers, managers and entrepreneurs and as productive members of society."

Mills and Pérez's visit also uncovered challenges faced by the Puerto Gaitán community and other stakeholders in the EO-certified operation. Like the rest of the global oil and gas industry, Pacific E&P is feeling the effects of the recent downturn in oil prices, and has been cutting costs to adjust to the situation. For workers and community members at and around the Quifa and Rubiales fields, many of whom referred to lower prices as "the crisis," Pacific's actions have had significant secondary effects. Pacific's staff for social engagement in Puerto Gaitán has been reduced from 35 to just two employees, reducing the amount and frequency of contact between the company and community members. Due to the slowdown in oil operations in the area, the Trapitos program has seen a 75 percent decrease in sales if its product in the last year. Nevertheless, interviews and investigation by Mills and Pérez's confirmed that Pacific maintains contact with communities around the site and continues to invest in development programs.

Check back on the EO blog for more information on the Verification Audit and site visit, including the Summary Audit Report and notice of resolution of the AFL-CIO labor complaint, to be published in the coming weeks. 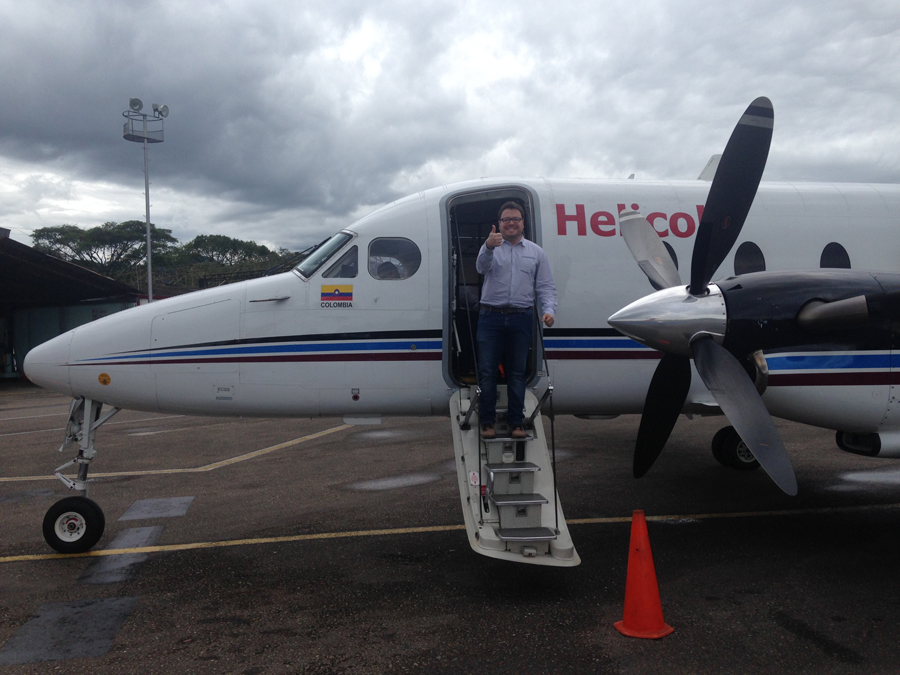