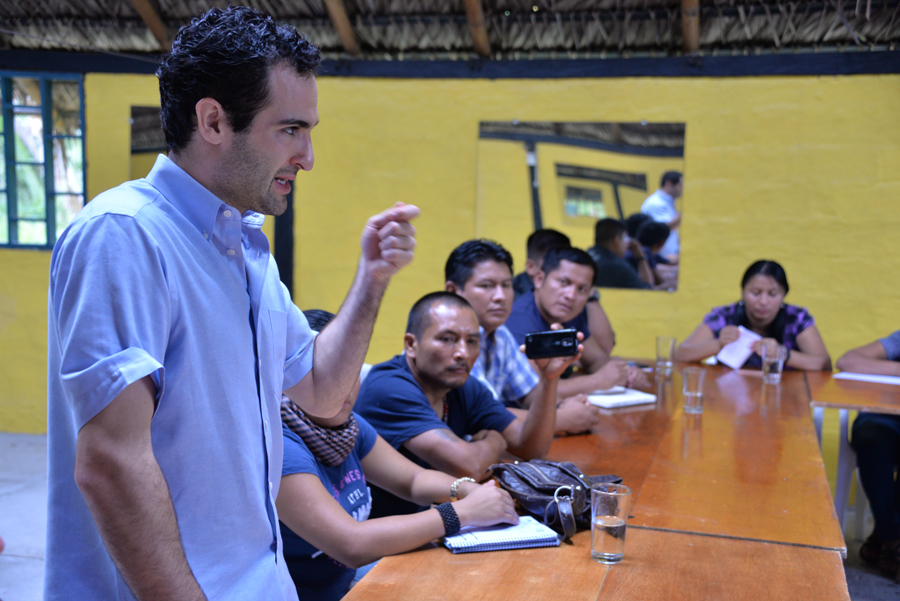 EO President and Co-Founder David Poritz speaks at a community workshop in Esmeraldas, Ecuador in January 2015.

EO’s model for responsible energy production and our work with communities and companies, particularly in Latin America, has led to increasing recognition from various academics. Our pioneering work in the Amazon Basin during the organization’s early years offers unique insights and lessons for academics and researchers interested in local communities’ experiences with extractive industries in the region. Being the first organization to advocate for local populations with a system of voluntary standards built on the input of multiple stakeholders, EO has proven to be a focal point for research in the realm of human rights and energy development.

Last month, a discussion paper written for the Global Economic Governance Initiative at Boston University entitled “A Line in the Equatorial Forests: Chinese Investment and the Environmental and Social Impacts of Extractive Industries in Ecuador”, authored by Rebecca Ray and Adam Chimienti, two Boston University PhD candidates, suggests that EO’s standards could serve as an effective means of ensuring responsible development for energy companies operating in Ecuador. In particular, the paper points to Andes Petroleum, a Chinese state-owned oil and gas company with significant holdings in Ecuador that would benefit from EO certification of its sites:

Andes [Petroleum] will have to genuinely commit to respecting indigenous territory and ensuring a complete and satisfactory prior consultation process. One way to make such a comprehensive and credible commitment would be for Andes to work with the Equitable Origin industry certification program, whose EO100 standard covers a broad array of performance targets, including indigenous peoples’ rights as well as biodiversity conservation. The EO100 standard is new, having recently certified its first oil site (Pacific Rubiales, in Colombia), so it offers Andes Petroleum a way to set itself apart as an industry leader. (p. 30)

Prior to the mention of EO, the publication illustrates the long history of social and environmental problems that have arisen as a result of the oil industry in Ecuador. Beginning with the first discoveries of recoverable oil in the 1970s, Ecuador has experienced a steady influx of foreign companies seeking to extract and export the vast reserves hydrocarbons that sit beneath the rainforest. With more biodiversity and sensitive ecosystems than anywhere else on earth, Ecuador has been particularly vulnerable to devastating environmental destruction as a result of extractive industries. Furthermore, Ecuador is home to numerous tribes of indigenous peoples that have witnessed their ancestral lands cleared to make way for industry infrastructure and roads. In addition to environmental and cultural damage as a result of the oil industry, there exist the problems of currency inflation, negative employment effects, and corruption. However, as part of the country’s new constitution that took effect in 2008, a national plan for economic development established laws that require free, prior, and informed consent (FPIC) granted by local communities before any oil or mining activities can take place. Also, the new laws are the first in the world to give legal rights to natural habitats that can be defended in court. Given the new regulatory framework, it is now in a company’s interest to find more comprehensive means of achieving trust and good relations with host communities so as to avoid legal disputes and potential protest. As such, the authors from BU make their recommendation that EO certification be implemented in Ecuador. 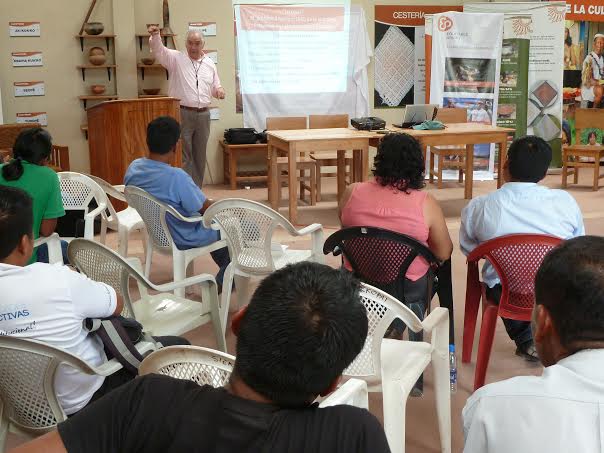 EO Advisor and former Energy Minister of Ecuador speaks at a community workshop in San Pablo, Ecuador in August 2014.

As an innovator in the sustainability field, EO encourages those individuals associated with academic institutions to analyze and make mention of our organization and our specific approach. Such references in academic literature serve as critical feedback that helps to make EO standards stronger and more effective. Moreover, as a nonprofit entity, EO is eager to partner with any academic institution as we persue our mission.