Elevating Indigenous Voices in Debates Over Energy Development on Their Lands 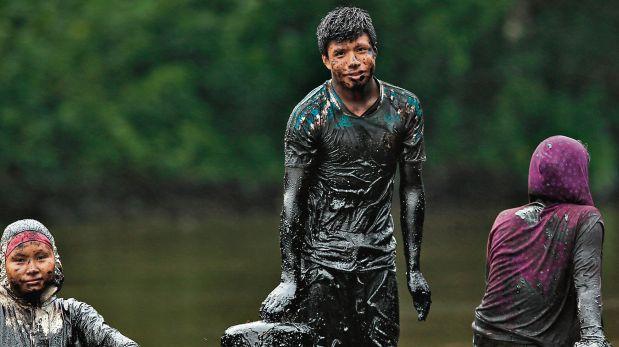 Residents of the village of Chiriaco covered in oil that spilled into a local river from the February 2016 oil pipeline leak in Peru. (photo: El Comercio)

Editor's note: The author of this post, Indigenous Peoples' rights expert James Anaya, is a member of the Equitable Origin Board of Directors and a Regents' and James J. Lenoir Professor of Human Rights Law and Policy at University of Arizona’s James E. Rogers College of Law. He served as the United Nations Special Rapporteur on the Rights of Indigenous Peoples from 2008 to 2014.

In early February a 40-year old pipeline that is Peru’s main conduit for crude oil ruptured, spilling 3,000 barrels of oil in the Amazon rain forest and polluting two rivers. Several indigenous communities depend on the affected waterways, and their contamination poses a serious threat to those communities’ health and well-being. The spill is just the latest occurrence in a long history of energy development in indigenous territories that brings more harm than benefit to the people that live there—a history that extends far beyond Peru. But this history can be reversed through open dialogue between indigenous peoples and other stakeholders in energy projects and, above all, respect for indigenous peoples’ rights. An EO-organized event that took place in Peru last year provides an inspiring example of what that respectful dialogue could look like.

In June of 2009, as United Nations Special Rapporteur on the Rights of Indigenous Peoples, I traveled to Bagua, Peru to investigate the worst political violence there since the height of the Maoist insurgency of the 1980s and 1990s. Weeks before I arrived, indigenous communities of the Amazon protesting oil development projects in their territories had clashed with police, leaving at least 30 people dead and more than 200 injured.

After my visit I made several recommendations, including broader and more inclusive consultation with indigenous peoples that conforms to international standards for respecting their rights. Decades of irresponsible development projects—logging, mining, and oil and gas—in Peru that brought social disruption and environmental destruction to indigenous communities underpinned the 2009 conflict. More often than not, these projects were approved by the national government with little to no consultation with the communities who would feel their direct impacts. I believed that that pattern must be reversed if the issues that led to the clash in Bagua were to be adequately addressed and similar violent incidents were to be avoided in the future.

Today, indigenous land rights and government-sanctioned oil and gas development appear to be on a collision course once again in Peru. More than 30 percent of the country’s territory belongs to indigenous Peoples, and in 2010 over half of those lands had already been zoned for oil and gas development. In Peru and most other countries in Latin America, the state holds exclusive rights to mineral and hydrocarbon resources. Despite advances in the law, the types of consultation and dialogue I envisioned and recommended have remained elusive in Peru.

But last fall, a novel event offered a glimpse of a fresh start. In October, representatives of indigenous groups, industry, government, and international nonprofit organizations met in Lima for a forum on fair practices in energy development. The lead organizer of the event was AIDESEP, the same indigenous group that organized the protest in Bagua that preceded the bloody clash with the government in 2009. Its leaders were among the 52 indigenous people arrested for their participation in the protests. Equitable Origin was the co-organizer of the forum, working with AIDESEP to bring together a diverse set of stakeholders and foster productive discussion. With its dedication to promoting responsible energy development practices through transparency and engagement on equitable terms, EO was an ideal facilitator of the event; the EO framework held the hope of stimulating the kinds of discussions I had recommended after my visit to Bagua. The forum was sponsored by The U.S. Agency for International Development (USAID) and the U.S. Department of the Interior International Technical Assistance Program (DOI-ITAP), an indication that the international community (the U.S. in particular) has an interest in dialogue and promotion of respectful energy development.

The forum was not a panacea for the problems of poor consultation with indigenous communities or irresponsible energy development. But it did bring together all of the parties affected by those problems in a new way, with indigenous peoples leading the discussion for the first time. Government and indigenous representatives, who six years earlier had been at opposite sides of a deadly confrontation, engaged in respectful and productive dialogue. Whatever the future of oil and gas development holds in Peru, it will only be made better by events like the forum and the discussions they spark.

As the world’s population grows and residents of developing nations climb out of poverty, global demand for energy will grow--by more than one-third from 2013 to 2040, according to the International Energy Agency. Meeting this demand will require new energy projects, a growing share of which will be in indigenous territories. As in Peru, these projects will threaten to undermine indigenous peoples’ rights even as they may offer hope for improving their way of life. Only open dialogue predicated on respect for indigenous peoples’ rights as landowners and human beings can break from a troubled history and define a new era for responsible, transparent, and equitable energy development on indigenous lands.