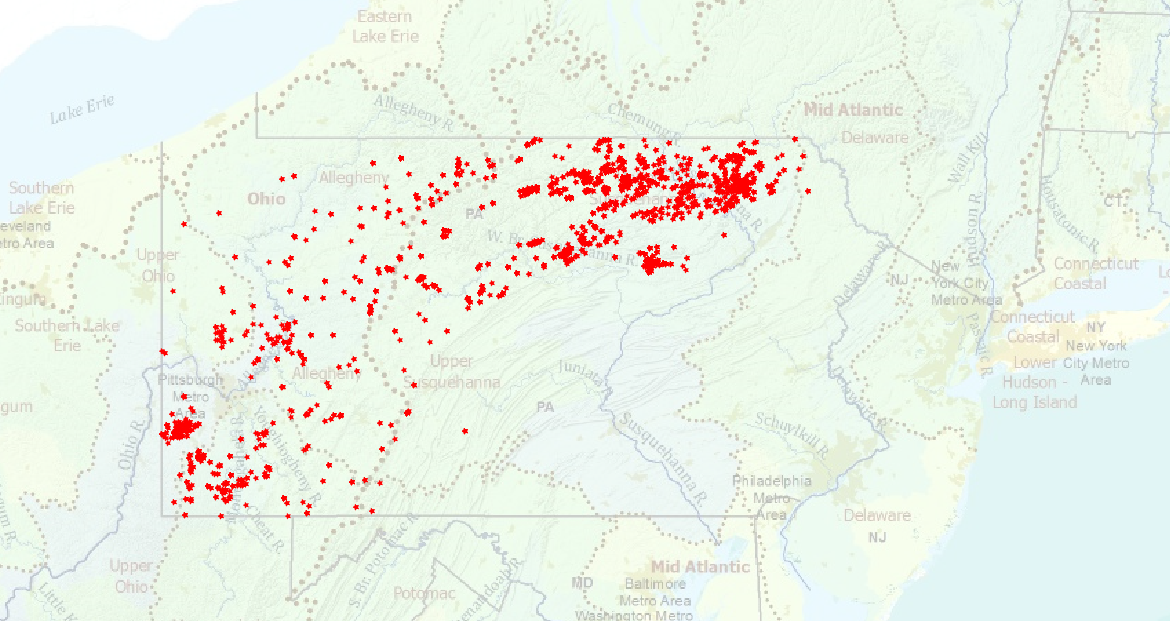 A screen shot from the Hydrodesktop mapping tool showing the location of gas wells in Pennsylvania cited by the state Department of Environmental Protection for violation of environmental regulations for water use and water quality.

In early May, Dr. Susan Brantley, a Professor of Geosciences and Director of the Earth and Environmental Systems Institute at Pennsylvania State University, sparked new interest (and reignited controversy) in the debate over the impacts of shale gas development, often referred to as fracking. Dr. Brantley, along with environmental consultant Garth Llewellyn and six other co-authors published a studyin the scientific journal The Proceedings of the National Academy of Sciences that included the finding that several residential water wells in Pennsylvania were likely contaminated by nearby shale drilling activity. The study was significant because it showed strong evidence, perhaps the strongest to date, that shale drilling activity had directly contaminated underground sources of drinking water. The New York Timesreported on the study and its findings (we tweeted a link to the article, citing it as evidence of the need for higher environmental standards for water protection), and also put it in the context of the ongoing debate over the validity of shale development's threats to groundwater. The article quoted two industry sources who took issue with the conclusion that discovery of a common fracking chemical in water wells meant that drilling activity caused the contamination.

Just a few days later, I had the privilege of meeting Dr. Brantley in person as she facilitated the 2015 Shale Network Workshop in State College, Pennsylvania. Funded by the National Science Foundation, the Shale Network is an organization with a simple mission: collect and organize data on the water impacts of shale development in Pennsylvania, and make those data available to scientists and the public to foster informed decision making by all stakeholders. The two-day workshop brought together representatives of nonprofits, universities, regulatory agencies, oil and gas companies, and consulting firms to share and discuss the latest data on water impacts of shale gas development in the Northeastern U.S. The program for the workshop included presentations on some 35 studies of water quality and quantity in relation to shale development.

Some key takeaways from the workshop:

To help address the challenge of lack of available data, the Shale Network and university water research alliance CUAHSI created Hydrodesktop, and open-source software program for mapping and analyzing water data. The workshop began with a demonstration of the Hydrodesktop tool and how it can be used to examine data from multiple sources on water impacts of shale development, from gas well locations to violations of state environmental regulations.

With so much still unknown about the health and environmental impacts of shale oil and gas development, innovative data analysis and sharing tools like Hdrodesktop are hugely valuable. But these tools are only useful when recent and accurate data is available to analyze. This is a key reason for greater transparency and disclosure of information by the oil and gas industry and other institutions that have data to share--the more data the Shale Network and other research organizations have to work with, the better all stakeholders will understand the impacts of shale development (on water, air, ecosystems, and communities), and the greater the ability to avoid and mitigate them.

For that exact reason, testing, monitoring, and disclosure are central components of our draft EO100 for Shale Oil and Gas , and we hope that the ongoing development of the standards and eventual certification of shale development sites will contribute to wider data sharing and better understanding of the risks of shale development and how to address them.

As Dr. Brantley puts it in the video below about the Shale Network,"[shale development] is not as bad as some of the environmental groups make it out to be but it's not as good as the industry wants to make it out to be. The question is how to improve it so that the frequency of problems goes down, and how to understand long-term problems."