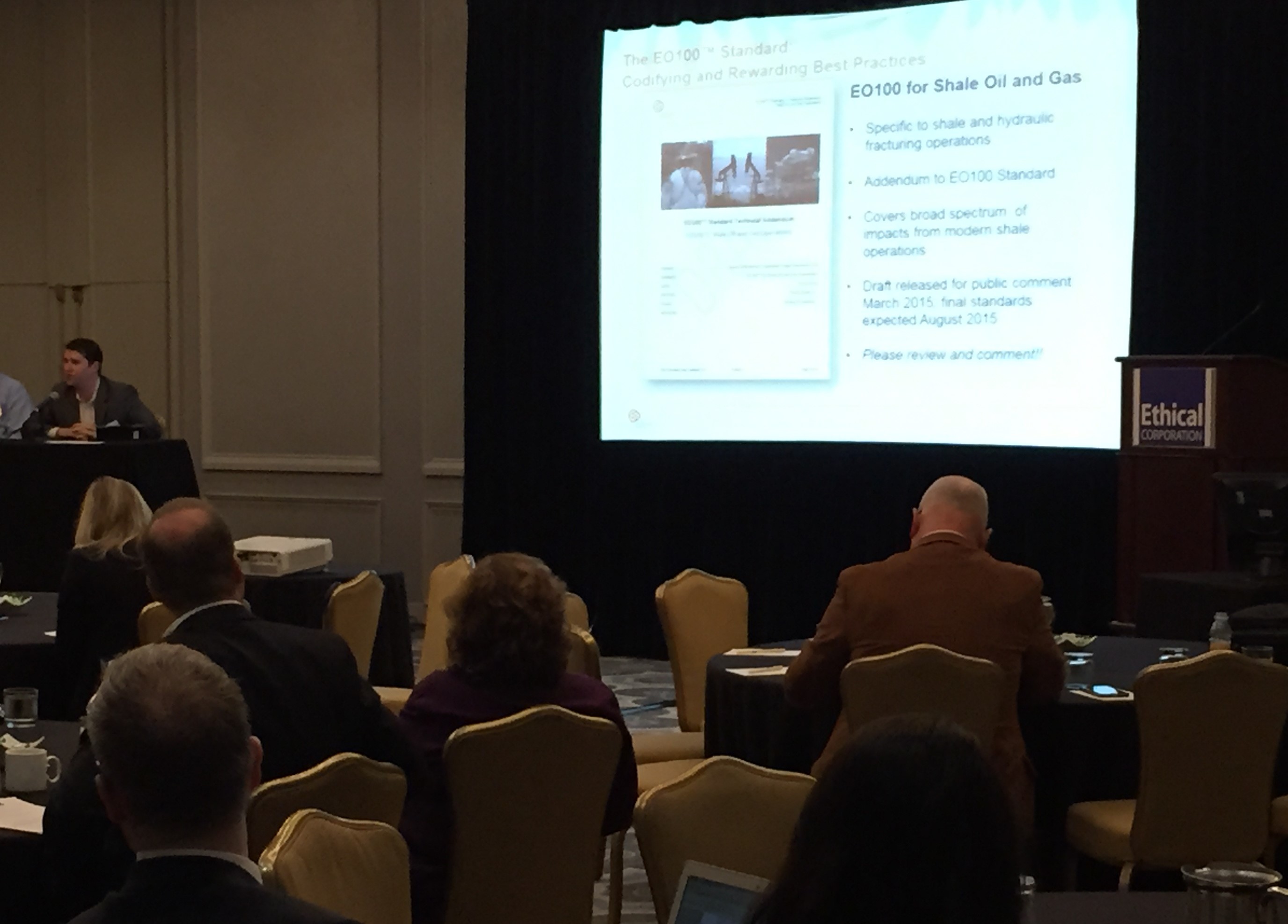 EO Director of Shale Programs Josh Garrett (top left) presents on the draft EO100 for Shale Oil and Gas standards at the Responsible Extractives Summit in Houston on May 1.

Last week, EO Director of Communications and Director of Shale Programs Josh Garrett attended a meeting of sustainability and social impact professionals on best social and environmental practices for oil and gas and mining companies. The event, sponsored by Ethical Corporation, was called Responsible Extractives Summit - North America. The main themes of the gathering were transparency, sustainability and social engagement as approaches responsible operation. As a member of a three-person panel asked to discuss different strategies for reducing social risk, Garrett emphasized the merits of voluntary certification, in particular the credibility that comes from certification by an independent organization like EO. Speaking about the EO100 Standard, Garrett explained that it was unique in its application to social andenvironmental impacts of oil and gas development.

A central topic raised during the event was the concept of feasible social responsibility during times of low commodity prices. One important point was that firms must first and foremost honor agreements made with communities, regardless of budgetary shifts. And when deciding what programs to scale back to achieve savings, attendees agreed that it is prudent to continue local community engagement around development projects themselves and and shed the more periphery initiatives. One presenter put forth the suggestion of full disclosure regarding the possibility of projects being curbed or cancelled and resulting in community benefits being diminished or eliminated all together. Such forewarning and realistic disclosure is particularly important when margins are thin. Price fluctuations will remain a key factor in companies' cost-benefit analysis process when it comes to social risk aversion.

Being that the conference was held in the energy capital of the United States, it was appropriate that there was a session dedicated to Mastering Engagement with North American Communities. In this session, many of the important questions addressed stemmed from community expectations of companies operating extractive projects. It was argued that it is more important to meaningfully address problems like occupational hazards and environmental degradation than to actually solve them outright. In other words, showing genuine effort goes a long way, whatever the final results may be. By making such good-faith efforts, companies are seen as fair in their treatment of host communities. "Genuine" and "good-faith" were key concepts in the discussion of this topic; in the words of one participant, “it is no longer good enough to throw a barbeque and call it community engagement”. Comprehensive community engagement includes early disclosure, answering calls and requests, leadership buy-in through local political engagement, and humility from industry professionals. All of the points raised in the discussion synchronized well with the parameters of EO's draft EO100 for Shale Oil and Gas, the final version of which will guide future EO certification of shale development and fracking sites in North America.

Another session at the event that resonated with EO’s core mission was focused on indigenous communities and more specifically the concept of Free, Prior and Informed Consent (FPIC) in regards to energy development. A portion of this presentation was led a representative of an international indigenous rights group that advocates for first nation communities affected by extractive industries around the world. An oil and gas operation in Canada where indigenous protests against the project had turned violent and shut down production was raised as an example of what extractive companies stood to lose as a result of inept or incomplete engagement efforts. The subsequent delays ended up costing the company upwards of sixty thousand dollars per day.